In 1994, a house on Gowing Lane, built about 1820, was destroyed by fire. It had attached a small addition which was spared from the flames except for its roof. Investigation of the nature of its construction, together with documentation from the Historical Commission\'s building inventory, indicated that this was probably the original Sergeant Flint House, built about 1680 and subsequently attached to the 1820 house. The owner gave the structure to the Historical Society as a gift and the Minit Men again employed their dismantling, moving and reconstruction skills.

As late as 1690 the people of Haverhill considered abandoning the town because of Indian attacks. In 1708 some of their worst fears came true when 40 townsfolk were killed in as raid during the French and Indian Wars. Thus when Sergeant George Flint came to North Reading sometime between 1677 and 1690 [with his wife Elizabeth Putnam] he built a small but substantial “Block House” or fortified house not far from [what was to become] the Old Gowing Farm. This Block House or Garrison House had heavy planks running up and down the walls and small deeply set windows. According to historian Lilley Eaton writing in 1872, tradition said than it was the earliest house in the North Parish. George Flint was born in Danvers in 1652 and died in 1720.

The first member of the Flint family to arrive in what is now North Reading was Thomas Flint, George Flint’s father. Thomas came from Salem Village prior to 1663. That is the year that he died and left his farm to his son, George. It is not know exactly when the original house was built or located. We do know that it was located near where it was found as it was described in the 250th Anniversary of the Town of Reading, page 217, “the Sgt. Flint homestead was on rising ground a little to the northeast of the site of the dwelling house of Mr. Joseph Gowing.” The Flint house was built prior to 1684 and was built for garrison purposes (Genealogical History of the Town of Reading, page 136.) Some historians believe that it was moved from its original spot and attached to the Gowing building about 1840.

A garrison house was usually two stories high and had heavy studding that was covered with planks, from the eaves to the underpinnings, and then boarded over completely. There was no plaster on the walls or ceiling. The house generally faced south and a large fireplace was located on the north side. This is exactly what was found when the house was discovered in 1994.

The Sgt. Flint house was discovered in a very unfortunate way. On January 16th of 1994, a Sunday afternoon, a fire destroyed the Gowing farmhouse owned by Diane Downing. However, the rear shed was barely touched, except for the roof. After the fire, it was discovered that the shed was actually a very old building, and, after further research, it was concluded that it was part of the old Sgt. George Flint house.

The North Reading Minit & militia volunteered to dismantle the old portion in hopes that it could later be reconstructed on the Putnam Hose property. Before and during the dismantling process, two members of the militia made notes and sketches and later constructed models that will be used in the rebuilding process. After removing the clapboards, they discovered that the wide thick boards ran from floor to eaves, covering the thick 12” timbers. The pieces were then numbered and then removed for storage at the Putnam property.

Prior to the fire, the Downings had operated an organic farm called Harmony Farm, and sold vegetables from the shed. Little did people know when they were making their purchases, that they were standing in the “oldest house in North Reading.”

This research was done by Gary Priest, a member of the North Reading Minit & Militia. The Minitmen were authorized by the Historical Society, to reassemble the building on the Putnam property.

The men moved the pieces to beneath the Putnam House barn, and then to a temporary storage are on the property so that they could determine what materials could be used, and what needed to be replaced. When this was completed, they had a better idea of the costs that were involved. They estimated the total cost to restore the Sergeant Flint House to be $48,930 with all labor donated. They then began to raise funds from private donations from individuals and businesses.

Minitman Captain Gordon Hall outlined the restoration process in the application to the Historic District Commission as follows:
Reassemble 16’ x 18’ building to match the structure that was disassembled in 1994 as closely as possible. The materials to be used are as follows: (a) concrete pad (b) oak frame (c) oak or pine sheathing (d) cedar shingles. It will be located on the north side of the Putnam House property beside the school house and will comply with all of the zoning set backs. 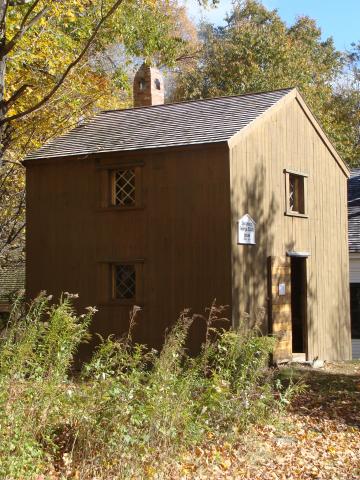 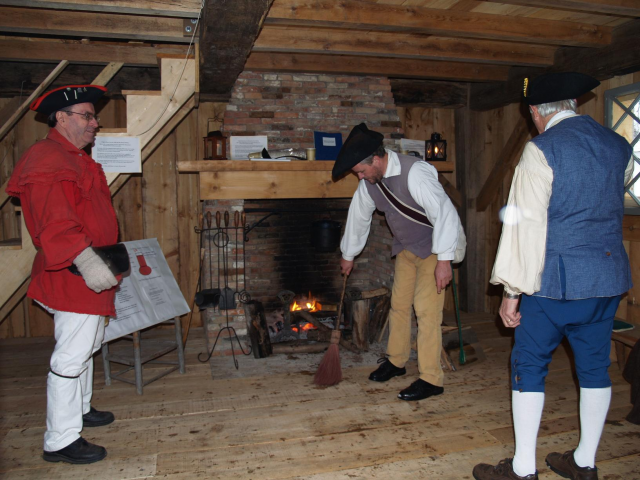